The Israeli oil spill of February 2021: many unspoken anomalies 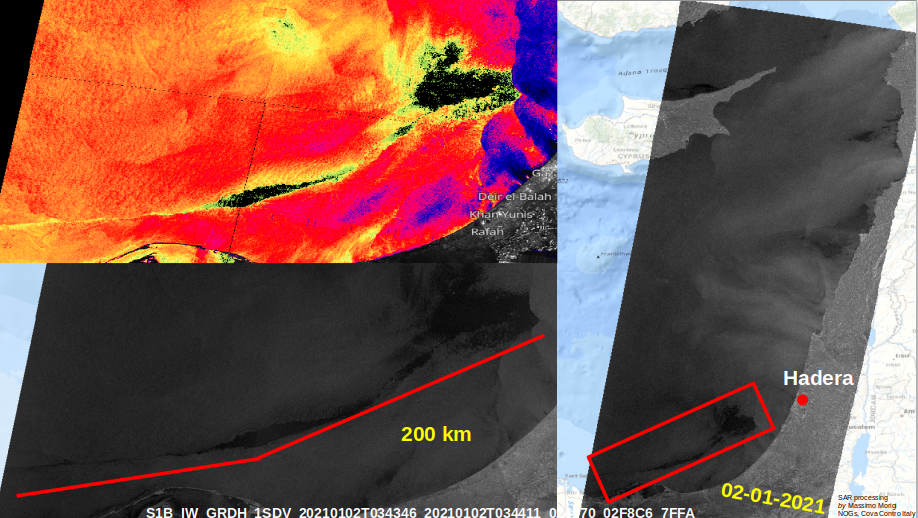 This a news last month – large globs of tar have washed up on much of Israel’s Mediterranean coastline in what officials are calling one of the worst environmental disasters to hit the country1. According to the Nature and Parks Authority, that is a pollution “one of the most serious ecological disasters” in Israel’s history. The source is thought to be an oil spill produced during a storm on 11 February from a ship some 50km (30 miles) off the coast. Satellite imagery and wave patterns are being used to trace the ship responsible2. Environmental Protection Minister, Gila Gamliel, said nine ships were being investigated and the Israeli government is considering legal action to win compensation which could run to millions of dollars. But – where they came from the dozens of tonnes of tar that have been found on many stretches of Israel’s 190km (120 miles) Mediterranean coastline? Israeli authorities are trying to find the ship responsible for an oil spill that drenched much of its Mediterranean shoreline with tar, an environmental blow that will take months or years to clean up, officials said. Has can only an oil tanker polluted the coasts 190 km? Debatable. The evidential proof visible in the images following. The analysis of “Cova Contro” have detected traces of many oil pollution (over ten) already a few months before (2 January 2021).

The analysis of “Cova Contro” have detected traces of oil pollution already a few months before (2 January 2021). However, in consideration of oil slick, and the previous fringes visible (image below), and the direction of the winds, it is reasonable to assume that we can also speak of submerged oil.

here is no straight forward way to identify and map submerged oil, however, since the submerged oil do change the optical properties of water, it should in theory be detectable using various change detection techniques; but we are studying them and finding financing for it.

Probabily, the Israeli authorities are still looking for the culprits but – beware the black tides keep coming.

All the world is the same. In Israel, Environmental Protection Ministry, particular attention is paid to Atmospheric pollution. In Hadera is the headquarters power station of one the older, unmodernised four of its total six coal-fuelled units- will be closed by mid-2022 in order to eliminate this major source of air pollution in the country4. Greenpeace claims that the station pollutes the sea water when coal is unloaded from ships and the sea water used for cooling the plant ends up in the Hadera River which harms wildlife. The following images show the anomalies recorded in the point indicated above.

The above presented allows me to say that, speaking of environmental terrorism5, highly excessive. The Authorities are still studying the ways of spreading the pollution; we hope they can tell us if we are talking about oil spills or submerged oil. “Cova Contro” continue to do Geointelligence Environmental to protect the environment and its wildlife.