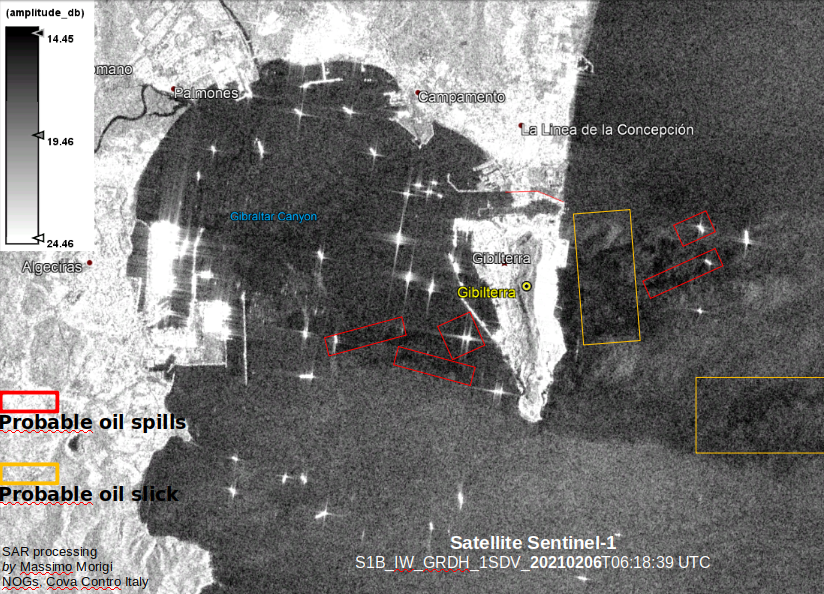 On the 12th of February, an estimated 2,000 litres of oil spilled into Gibraltar waters during a bunkering operation. Whilst taking on 1,800,000 litres of ULSFO (Ultra Low Sulphur Fuel Oil) the crew informs us that, due to a faulty valve not shutting off the oil flow, 2000 litres overflowed into the sea which will have detrimental effects on the surrounding wildlife. The ship was detained for further investigation.

The captain of the AM Ghent was eager to admit negligence and take full responsibility for the disaster. On the 28th of February the court ordered the captain to pay a fine of £20,000 allowing the AM Ghent to set sail the following day. The speed at which the case was wrapped up does “sound a bit fishy”. Why wasn’t (EMSA) European Maritime Safety Agency called in to investigate ?

However, the captain took full responsibility for the 2,000 litre oil spill, but satellite images from Sentinel 1(ESA) taken by “Cova Contro” detected traces of oil pollution around the port days before the AM Ghent docked in Gibraltar. By using more effective and efficient methods of imagery on a grand scale, a clearer picture of sea conditions can be seen in the underlying images:

All three images clearly reveal likely traces of oil pollution in and around the port prior to AM Ghent refuelling. Is the captain entirely to blame for all the environmental damages occurred in the bay? Debatable. The evidential proof visible in the images certainly leaves the verdict open to question.

“Cova Contro” is a non governmental organisation (NGO) devoted to action research, development, education and training in remote sensing, contributing to the well being of humanity and environmental protection. “Cova Contro” is focused on environmental issues mostly in Italy, carrying out thorough investigations into the impacts of hydrocarbons. Using satellite images along with software SNAP version 8,” Cova Contro” can supply us with indispensable information regarding such things as: city development, fire outbreaks, crop growth, storm prediction, oil spills/slick.